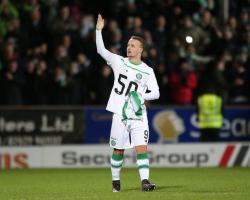 The Hoops striker took 21 minutes to take his tally to 50 in just 60 starts - the fastest Celt to reach that landmark since Charlie Nicholas in the early 1980s - before defender Jozo Simunovic doubled the visitors' lead with his first goal for the Parkhead side.

United striker Simon Murray reduced the deficit just after the half-hour mark but Scotland striker Griffiths grabbed his second three minutes after the restart before Kris Commons added a fourth to take Celtic six points clear of Aberdeen at the top of the table.

Griffiths reached the 50-goal mark quicker than other former Parkhead heroes such as Henrik Larsson and John Hartson and asked if the former Wolves striker, who has scored 24 goals this season, could be become a club legend, Hoops boss Deila said: "It is a very good performance to get to 50 so early.

"I am delighted with the way he plays.

"He has a five-year deal here so there is a good chance if he keeps scoring like this, that he can be a legend.

"When you say those names and say he has scored more goals than them in the same period then he has a big opportunity to really make a mark in Celtic's history."

Griffiths struggled at first under Deila but the Norwegian praised the 25-year-old's application in the past year.

Deila, who will talk with striker Anthony Stokes on Saturday about a possible loan move to Hibernian, said: "It is a message to everybody in life, if you want to change and you want to sacrifice to become the player you can be then everything is possible and he has done that.

"Now he is kicking on and scoring because he is prepared for every match."

Griffith was booked by referee Bobby Madden for taking his top off after scoring his first goal to reveal a t-shirt with the number 50 emblazoned on the front but he claimed it was "a million per cent" worth it.

He said: "It was an added incentive to go and get that goal and I knew when the chance came as long as I put it on target I would score.

"I texted Stevie (kit man) this morning to get a t-shirt made up for me and Broony (Scott Brown, injured skipper) said I should have had 51 under it

Two t-shirts, but I might have looked a little bit chunky.

"To get 50 goals for any club is a special achievement but to get 50 at a massive club like this is a joy.

"But I can't score goals without my team-mates and the most important thing was three points."

United could be subject to an Scottish FA investigation after two smoke bombs were left off in a section housing home supporters before the game.

The incidents occurred in the week that Celtic banned three supporters whom they believe set off pyrotechnics before and during the 3-0 William Hill Scottish Cup fourth-round win over Stranraer at Stair Park last Sunday.

Scottish FA compliance officer Tony McGlennan has reviewed video footage and Police Scotland has confirmed it is also to investigate the incident along with outbreaks of sectarian singing and chanting which is reported to have taken place during the Stranraer-Celtic match.

Following Friday's defeat, United remain 11 points behind Kilmarnock whom they play next week before a match against Partick Thistle, but boss Mixu Paatelainen insists they can still survive the drop.

It all starts next week.

"We realise that and Kilmarnock next weekend is a massive one.

"We have more than enough; all the tools to beat Kilmarnock and go after Partick Thistle.

"That's our aim and that's what we are here for."