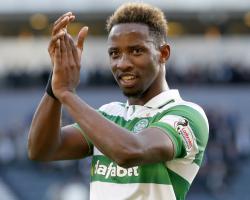 In a spirited performance by the visitors, Scott Sinclair crashed a shot off the post in the 23rd minute before home captain Lars Stindl, who had opened the scoring in their 2-0 win in Glasgow, volleyed home on 32 minutes to give the Bundesliga side the interval lead.

Striker Andre Hahn hit woodwork for the hosts after the break but, in the 76th minute, defender Julian Korb was shown a straight red card by Portuguese referee Manuel De Sousa for pulling Dembele down in the box as he shaped to shoot, and the French striker slotted in the penalty.

The Scottish champions finished the game looking for the win but had to be content with the point which took them on to two, with two matches remaining - against Barcelona and Manchester City

City's win over Barca on Tuesday moved Pep Guardiola's side five points ahead of Celtic.

Brendan Rodgers had something of a defensive crisis with Kieran Tierney, Kolo Toure and Jozo Simunovic all out while a virus prevented striker Leigh Griffith travelling to Germany.

Monchengladbach boss Andre Schubert was able to call upon Thorgan Hazard, brother of Chelsea star Eden Hazard, after he had missed the game at Celtic Park through injury.

The visitors survived several corners in the opening stages against a home side who took control without looking as purposeful as they had in Glasgow.

The Hoops, indeed, began to edge forward with growing confidence.

However, when they lost possession high up the field in the 20th minute, Monchengladbach broke with pace and goalkeeper Craig Gordon had to race from his goal to block a low drive by defender Tobias Stobl, who had breached the Hoops defence.

Three minutes later, the Bundesliga side enjoyed some luck when Sinclair's curling shot from just inside the box beat Yann Sommer but rebounded off the post, with the Foals keeper relieved to be able to run and gather the loose ball.

The anxiety among the Gladbach fans grew as their side struggled to hit top gear, but, when Hazard got beyond stand-in left-back Emilio Izaguirre once more, Celtic were made to pay

His cross found Stindl, who sent a right-footed volley past Gordon from 10 yards.

The Scottish champions, however, could have been satisfied to a degree with their first-half performance.

Rodgers' side started the second half confidently enough but were cut open again in the 52nd minute by Hahn, but this time Stindl did not connect with his shot properly and the ball trundled through to Gordon.

Fabian Johnson came close with an angled drive and Gordon saved a close-range effort from Christoph Kramer and a powerful drive from Hazard as Monchengladbach reasserted themselves.

Amid all that Patrick Roberts replaced James Forrest and, as the game stretched, opportunities presented themselves at both ends.

In the 65th minute Stindl set up Hahn, whose side-footed shot from 14 yards beat Gordon but came off the post while Dembele tested Sommer at the other end with a decent drive.

However, when Dembele was hauled to the ground inside the penalty by Korb as he skewed his shot wide of the target, De Sousa pointed to the spot and the striker sent the Monchengladbach man packing.

The Parkhead powerhouse sent Sommer the wrong way his spot-kick, much to the delight of the travelling fans - although it could have been even better had substitute Callum McGregor, on for Gamboa, not driven wide of the far post when presented with a late chance to give Celtic victory.