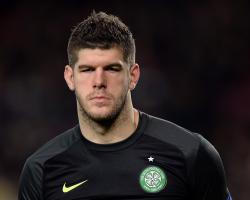 The Scottish Premiership leaders chiselled out a 1-0 victory through Kris Commons' fifth-minute strike, the forward's 22nd goal of an outstanding season - and Lennon was proud his team had managed to break a record which Shaw managed in both the 1913-14 and 1921-22 seasons.

"It's something that we're all very proud of, I'm sure particularly Fraser," Lennon said.

"We certainly don't take it for granted

These are special times for the players, when they look back on their time here they can look at that as quite an achievement.

"It's been a long time coming

To break (the record) is fantastic."

The Celtic manager was delighted with his side's overall performance, and singled out debutant and man-of-the-match Stefan Johansen for special praise.

"I was really pleased with the performance

Our football at times was fantastic and we were in total control of the game.

"There were some great performances, particularly Johansen on his debut

It's as good a debut as I've seen in my time as manager here, so I really enjoyed watching us play today.

"The only thing that was missing was a couple of more goals, which would have really emphasised our superiority in the game."

Upon learning that Forster is only four games away from the world record for consecutive clean sheets, Lennon said: "It's something to aim for.

"It's something that really keeps our season alive, I think we're pretty clear in the league now, so that's a yardstick for the players to try to achieve

That and keeping the unbeaten record going

That's 24 games and I can't ask any more of them really.

"We've just hit a really good vein of form in terms of our football, and I'm enjoying the way we are moving and passing the ball."

Striker Anthony Stokes was the main culprit in front of goal for Celtic when it came to passing up chances, particularly in the final moments when he refused to square to a team-mate when it would have all but guaranteed a second goal, instead taking the ball on himself and missing the opportunity.

Lennon refuted suggestions though that there was extra pressure on the striker now that Leigh Griffiths had arrived in the transfer window.

"It's just another striker in," Lennon said

"I thought he [Stokes] played well

I thought his movement was good and his touch was good, the only thing he was missing was a goal.

St Mirren manager Danny Lennon thought his side could have nicked something from the game, but was proud of their performance.

"When you speak about the game-plan and you go out and lose a goal like that, especially when you know what the strengths of Commons are, Marian [Kello]'s disappointed in it.

They still continued to go out there and believe in themselves

I was very encouraged."