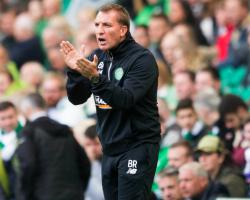 The 18-year-old agreed a four-year deal in February while playing for Start in Norway but did not arrive until June by which time his fellow Norwegian Ronny Deila had been replaced as Hoops manager by Brendan Rodgers.

Ajer, who can play in defence or midfield, came off the bench in the first half at Parkhead to replace Erik Sviatchenko after the Danish stopper had sustained a head knock in a clash with the visiting keeper Diego Benaglio.

After a nervy start in his home debut with Celtic a goal down to a deflected strike by Wolfsburg defender Paul Seguin, he settled down and indeed was awarded man of the match as strikes from Callum McGregor and substitute Ryan Christie gave Rodgers victory against the German outfit in his first home game as boss.

Sviatchenko should be back for the second leg of the Champions League second qualifier against part-time Lincoln Red Imps on Wednesday night, when the Scottish champions will look to recover from a shock 1-0 defeat in Gibraltar last Tuesday.

Ajer is ready if called upon, although defence rather than midfield - an area where Rodgers joked about having 20 players from which to choose - could be his best bet.

He said: "I came to Celtic to play and if he gives me the opportunity I am ready.

I think it is really good to be able to play more positions.

"I was extremely stressed and went out without warming up and I made some mistakes in the beginning which I am not proud of, but after a while I performed well and it was a big experience hearing the fans.

"It is a big honour playing for Celtic and to get man of the match was brilliant.

"It (Lincoln) was a disappointing result for us but if we play like we did we will beat Lincoln on Wednesday and this is our only focus."