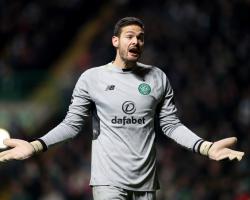 The Hoops' 2-0 home defeat to the Catalans in the Champions League ensured they would finish bottom of Group C without even the prospect of the Europa League to look forward to after Christmas.

The Parkhead side, however, remain unbeaten in Scotland with 34 out of 36 points in the Ladbrokes Premiership and now turn their attention to the Betfred Cup final against Aberdeen at Hampden Park on Sunday.

But he insists it will not be easy against the Dons, who are second in the table even though they have lost 4-1 and 1-0 to the champions in two previous meetings this season.

"We have done very well to put ourselves in this position," said the Celtic goalkeeper.

"We want to be relentless and keep going and win as many matches between now and the end of the season as we can.

"We have worked very hard in the first part of the season to get to a cup final, to play some very difficult games in Europe and we want to win this one.

"It is going to be tough, with the qualities Aberdeen possess.

"We have played them twice this season and we know what we are up against and we know we are in for a very tough game.

"We have come out on top but they have been very close games.

"Even at Celtic Park, the scoreline was probably a little flattering towards us so we know we know it is going to be very tough.

"They have good qualities and we have to be at our very best to make sure we are containing that but also to go ahead and try to dominate the game and win the match."

A Lionel Messi double - the second coming from the spot - helped Barcelona to a comfortable win in Glasgow.

However, Gordon caught the eye in the first half with a remarkable save from Luis Suarez's header from close range, which pleased the Scotland number one no end.

"Hopefully that will be in the highlights reel come the end of my career," Gordon said

"When you do it against a superstar like Suarez, it is always going to get talked about more

"It is something that we worked on during the week.

"The speed across goal is how Barcelona get a lot of their goals and my goalkeeping coach had me well prepared for that type of thing to happen and we were doing similar exercises to that for a few days leading up to it.

"There were not too many saves in training but eventually I got the one that really mattered.

"I thought the performance was reasonably good against Barcelona

We restricted them to fairly few chances.

"They are always going to get chances, they are that good a team.

"I thought we performed pretty well in that respect and I think we can take confidence from our performance and certainly take into our domestic campaign as well."

Indeed, Gordon believes this season's European experience will stand Celtic in good stead for next year.

The former Hearts and Sunderland keeper said: "There are a lot of players in the squad who haven't tasted Champions League football before and the ones that had were desperate to get back there.

"Now we have had that taste and that experience, then I do think that can help us in the next qualifying campaign.

"We are all aware of how good the nights at Celtic Park have been and we will be desperate to try and give them that again next season."