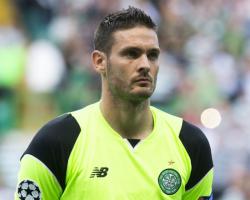 The Hoops refused to accept defeat in the Borussia-Park stadium on Tuesday night after home captain Lars Stindl, who had opened the scoring in Gladbach's 2-0 win in Glasgow, volleyed in after 32 minutes.

In the 76th minute of a second-half that ebbed and flowed French striker Moussa Dembele levelled from the spot after he had been felled in the box by Julian Korb, who was sent off for his troubles.

Substitute Callum McGregor missed a great chance before the end to snatch the win for the visitors, who face Barca at home and Manchester City away in their final two fixtures.

The Catalans have nine points, City are second with seven and Gladbach are on four, while Celtic remain bottom with two points - they drew 3-3 with City at Parkhead - which leaves qualifying for the knockout stages of the tournament or the Europa League still unlikely.

However, Gordon is giving nothing up yet, as he prepares to face a Barca team who were beaten 3-1 in Manchester.

The 33-year-old told a number of broadcasters: "We will concentrate on trying to get the performance up to those levels and if we continue to improve at this level, we still have a chance

Manchester City won their home tie (against Barcelona) so we have a chance.

"We have performed at the top of our abilities a couple of times and came away with two draws.

"If we can do that again we will give ourselves a chance to come away with all three points."

Before the trip to Germany, Celtic had only won one and drawn one of their past 25 away games in the Champions League.

However, Gordon, named in Gordon Strachan's squad for Scotland's 2018 World Cup qualifier against England at Wembley on Friday week, is confident that record will be improved if standards remain high.

He said: "The record is not great, we can't hide from that but if we put in performances like that away from home we will give ourselves chances to get results."

Indeed, like many of the Celtic players and manager Brendan Rodgers, the former Hearts and Sunderland keeper left Borussia-Park feeling as if they could have taken all three points.

Rodgers was especially pleased at the way his side responded after going a goal down against a side who had bossed the match at Celtic Park and Gordon claimed lessons had been learned from that game.

He said: "Their performance in the first game was probably better than it was on Tuesday night.

"Certainly we learned a lot from the first game

We dealt with their threat a lot better.

"Our gameplan worked really well and everybody was out there fulfilling their potential and doing everything they could for the team.

"It wasn't against the run of play but certainly we had the better control of the game when we lost the goal.

"That can happen but we responded very well to that

We continued to do what we did in the early parts and got our reward in the end.

"I thought we could have won it to be honest

I don't think it comes much better than that in terms of performance.

"We got one points, we could have got three."