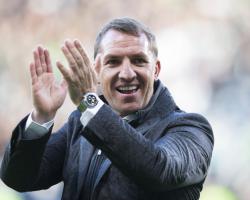 The Hoops are unbeaten domestically, top of the Ladbrokes Premiership and with a Betfred Cup final against Aberdeen to look forward to at the end of November.

The Bundesliga club, however, were comfortable 2-0 winners when the teams met at Parkhead even though they had several key players missing and the result left Celtic bottom of Group C with one point from a possible nine.

The former Swansea and Liverpool boss acknowledged the increase in quality in the Champions League although he believes his side can leave Monchengladbach with a positive result.

He said: "They reinforced that they are a very good side, even with the players missing.

"The level they are developing over the last couple of years is a level we are trying to get to obviously over time.

It is a step up even from that with the intensity, the quality, the speed.

"We are taking a couple of jumps up to that level.

"The Champions League has been a brilliant experience for us and playing against the great teams we have played against will prove to be a great foundation for us over the next few years.

"That will help us for the future but for now we are only concentrating on giving it everything in this game.

"There is no doubt we can win here

If we perform to the level that we know we can then of course it is a possibility for us, or else we wouldn't be here."

Rodgers will be without three more key players following the news last week that left-back Kieran Tierney would be out for two months with ankle ligament damage.

Kolo Toure missed the trip with an abductor problem while fellow defender Jozo Simunovic is struggling to play so soon after the win over Aberdeen on Saturday with striker Leigh Griffiths absent due to a virus.

Rodgers said: "It is unfortunate but you can't control it

It is something that you can't worry about.

"You hope those players can get back as quick as they can but it is an on-going issue with Jozo and Kolo."