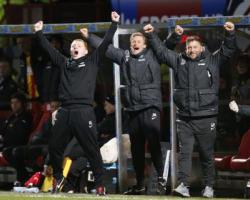 Celtic 6-0 Inverness CT: Match Report - view commentary, squad, and statistics of the game as it happened.Triple for Stokes as Celtic triumphAnthony Stokes helped himself to a hat-trick as Celtic handed Inverness a 6-0 thrashing in their Scottish Premiership clash at Parkhead.The in-form Hoops striker grabbed two before the break before scoring his third from the spot early in the second half.Celtic keeper Fraser Forster saved an Aaron Doran penalty almost immediately afterwards but Leigh Griffiths, Efe Ambrose and substitute Teemu Pukki, on for Stokes, completed the rout.It was 40 years to the day that the Parkhead club had clinched nine titles in a row under Jock Stein.Neil Lennon's men had won their third successive title last month and although traditional rivals Rangers are on their way back to the top flight- they will play in the Championship next season as League One champions - there is enough trouble in the Ibrox boardroom to suggest another long run of title wins in the east end of Glasgow is well under way.There was a minute's applause before the game in tribute to former Rangers and Scotland defender Sandy Jardine and former Barcelona boss Tito Vilanova who both passed away last week.A series of banners held up by some Celtic fans in the Lisbon Lion stand before the game read: 'A man must be a celt on and off the field otherwise he is of no value to this club'.The display could have been referring to Griffiths who is under investigation by the police, the Scottish Football Association and Celtic for allegedly joining Hibernian fans, of which he is one, in singing a song calling former Hearts player Rudi Skacel "a refugee" in a pub before the Edinburgh derby last month.However, that debate was for another day as the former Wolves forward and the rest of his team mates put the hapless Highlanders to the sword once again, John Hughes' side having lost 5-0 in their last trip to play Celtic.Stokes' first goal came after 33 minutes of mostly domination when, from a Griffiths corner, he rose to flick his header into the far corner.The game opened up more after that

Celtic defender Ambrose bravely stuck his head in front of a goal-bound drive from Danny Williams before Dean Brill made a decent save from Stokes at the other end.The increasingly busy Caley keeper was called into action again six minutes from the break, making a great save down at his left-hand post when right-back Adam Matthews fired in a powerful shot.But a minute from the interval Stokes made it 2-0 with some ease when he drove in from eight yards after Kris Commons had missed a fine cross from the right by Griffiths.It looked like being a matter of how many Celtic would score, a notion strengthened three minutes into the second-half when Brill had to tip a powerful drive by Griffiths over the bar for yet another Hoops corner, which Caley defended.Stokes secured the match ball in the 53rd minute after midfielder Stefan Johansen won a penalty when he was squeezed by Garry Warren and Ross Draper, the Republic of Ireland striker calmly beating Brill from 12 yards.Less than two minutes later there was some anger among the Celtic fans when referee Craig Charleston awarded Caley a chance to pull a goal back from the spot when defender Virgil van Dijk tackled Billy McKay, but Forster dived to his left to parry Doran's penalty to safety.Forster then made a good save from McKay's angled-drive but Celtic were relentless.Stokes crashed a shot off the bar before van Dijk sent a header against the post but in the 68th minute Griffiths made no mistake when the chance was put on a plate for him by Stokes.Ambrose glanced in a Commons cross for number five and Pukki drilled in number six before the final whistle sounded to the delight of the bedraggled Caley players