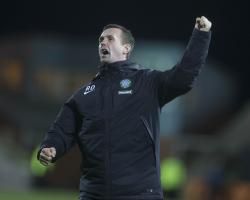 Celtic 4-0 Motherwell: Match Report - view commentary, squad, and statistics of the game as it happened.Hoops go top in styleCeltic moved to the top of the Scottish Premiership with a 4-0 trouncing of Motherwell at Parkhead, with right-back Mikael Lustig the returning hero.Defender Virgil van Dijk opened the scoring in the 26th minute of a one-sided first half with a close-range header, before striker Leigh Griffiths doubled the Hoops' lead just before the interval.Stefan Johansen and Emilio Izaguirre both hit the frame of the goal after the break before substitute Lustig helped himself to a quickfire double, a shot in the 76th minute followed by a header five minutes later.The Swede, who came on for Adam Matthews at half-time to make his first appearance since November after recovering from injury, was denied a hat-trick by the crossbar as Ronny Deila's side ran out easy winners.The champions are one point ahead of the Dons with a game in hand while Well, after three top-three finishes in succession, looked bedraggled at the whistle and look like they could spend the rest of the campaign fighting a relegation battle.On a freezing cold night at Parkhead, Deila brought Anthony Stokes back into his side for the first home match of the year as midfielder Liam Henderson dropped down to the development team, despite scoring in the 2-0 win over Hamilton at the weekend.Midfielder Stephen Pearson made his second debut for the visitors against another former club after signing for the Fir Park club until the end of the season

Simon Ramsden returned from injury with 17-year-old defender Luke Watt handed a start, but skipper Keith Lasley was out with a broken toe.Celtic had a stranglehold of the game from kick-off, coming close when midfielder Johnsen sent a 25-yard drive whistling past Dan Twardzik's left-hand post.A long first-half for the Steelmen ensued and although a Celtic goal was inevitable, it came from a poor Stokes corner which hit the first defender and came back to him.When the Irishman delivered a better cross to the back post at the second attempt, van Dijk leapt high to head past Twardzik.The goal left the visitors little option but to open up and on the half-hour mark a delicate chip from wide by Pearson, when he found himself with no option, almost caught out Hoops goalkeeper Craig Gordon - who was happy to see it drift past the far post.The champions took control and three minutes from time Stokes was the provider again with a fine cross from the left which gave Griffiths the chance to head past Twardzik.At the interval Motherwell's Lionel Ainsworth made way for Dominic Thomas, who flashed a drive just past the post in the 49th minute after the home side had momentarily lost concentration.That was as much of a rally as the Lanarkshire side could muster.Just before the hour-mark, Johansen headed a cross from left-back Izaguirre against the post before a first-time drive from a Lustig cutback was well saved by Twardzik.As the procession towards the Well goal continued, with James Forrest on for Stokes, Izaguirre crashed a shot off the bar after being set up by Griffiths.Johansen and Mark O'Brien clashed heads in the 70th minute and were replaced by Stefan Scepovic and Craig Moore respectively - but the pattern was set.Lustig scrambled a shot in from a Forrest pass to make it 3-0 and then headed in a Griffiths cross for number four.With the crowd willing him to capture the match ball, the crossbar blocked Lustig's drive following a Kris Commons' free-kick, arguably the only disappointment in what was a commanding and ominous performance