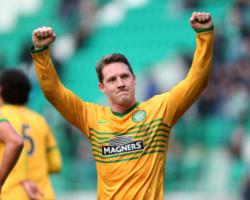 Stokes hits treble in one-sided winAnthony Stokes' third Celtic hat-trick earned Celtic a comfortable 3-0 Scottish Premiership win over St Johnstone at Parkhead.The Irishman had netted just twice in the 18 games before Leigh Griffiths' B#1million arrival from Wolves but made it four in two games as he was partnered alongside the former Hibernian man from the start for the first time.He opened the scoring after 16 minutes before adding a quick-fire double after the break to take his tally for the campaign to 11 and reaffirm the league leaders' 21-point lead over nearest challengers Aberdeen.The clean sheet saw keeper Fraser Forster equal former Aberdeen goalkeeper Bobby Clark's 43-year-old record of 12 games without conceding a league goal.But the shut-out had little to do with the Englishman's talent and more about Saints' lack of menace in attack.When he did have a save to make with eight minutes left, it was a result of a deflection off team-mate Virgil van Dijk.The moments before kick-off were marked by the re-appearance of the Green Brigade

The controversial ultras group was banned and its base in section 111 of Celtic Park was closed by Hoops chief executive Peter Lawwell at the start of December following several warnings about behaviour.But with just five minutes to go before the match started, a 250-strong group holding a Green Brigade banner marched into section 118 of the Lisbon Lions Stand to the sound of cheers from the rest of the Parkhead support.The group's repertoire was restricted to songs about the team rather than the political numbers which have landed it in trouble in the past, but it certainly helped to lift the atmosphere on a day when the Glasgow giants ran out in front of another sparse crowd.There was a flatness to Celtic's play in the opening moments and they were almost undone after seven minutes as David Wotherspoon flashed a decent strike just over the bar after Emilio Izaguirre gifted him possession.Griffiths made his first Hoops start two weeks after completing his move from Molineux but he wasted his first chance as he wandered offside before heading wide from a Kris Commons cross.But the Scotland striker soon helped engineer the opener.He combined with Van Dijk after the Dutchman's driving run and then played in Stokes, who wriggled past a couple of half-hearted challenges on the edge of the box before planting a shot beyond Alan Mannus' reach.Izaguirre limped off to be replaced by Darnell Fisher after 21 minutes but that did not deter Neil Lennon's side now they had the lead.Commons crashed a thunderous left-foot shot off the bar from 30 yards out as the hosts cantered towards half-time without giving Saints a sniff.Lennon's men had cruised through the first period but returned for the second with an increased tempo and threatened twice in the opening stages as first skipper Scott Brown shot straight at Mannus before Stokes went high and wide with a wild swipe.Stokes then sent a free-kick over the bar while there were some moments of scrambled defending from the visitors as the Hoops stepped it up again.But the pressure told as Brown went over the heads of the Perth defence with a scooped cross to Stokes, who took a touch before smashing the ball into the bottom corner at the back post.The Irishman completed his hat-trick two minutes later as Stefan Johansen and Commons worked together before feeding Stokes, who drilled a low drive past Mannus at his near post.The keeper was making his first appearance since breaking a thumb a fortnight ago but it was his reactions that looked fragile as he got down slowly to the shot.He looked beaten again soon after as Brown hammered a low shot off the base of the post, while substitute Derk Boerrigter fire wide after Griffiths' back heel put him through.Forster had been a virtual spectator for 82 minutes when he had to produce an instinctive block with his foot after Nigel Hasselbaink's shot sprang up off Van Dijk to earn his record-equalling shut-out, while Griffiths was denied his first Hoops goal by another offside flag in the final five minutes