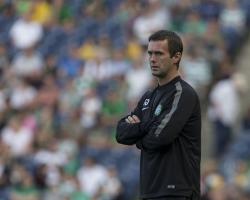 Celtic 2-1 Aberdeen: Match Report - view commentary, squad, and statistics of the game as it happened.Celtic back to winning waysCeltic got their season back on track with a 2-1 Premiership win over Aberdeen at Parkhead, but not without making their fans sweat a little.Ronny Deila's side went into the game without a win in four and having been knocked out of the Champions League qualifiers.After defender Jason Denayer gave the home side the lead in the seventh minute, albeit with a fortuitous goal, and Kris Commons made it two with a deflected shot seconds after the break, it looked like the Hoops would cruise to victory.However, Dons striker David Goodwillie reduced the deficit just after the hour mark to make it a nervy ending, with the cheers from the home fans at the final whistle carrying a fair measure of relief.Celtic travel to Austria on Wednesday for their first Europa League group clash against Salzburg the following day, and Deila will know further improvement is needed if they are to make a better fist of that competition.Perhaps there should have been no surprise that Celtic looked disjointed in the very early stages.Deila gave debuts to Serbian striker Stefan Scepovic, who signed from Sporting Gijon on transfer deadline day, and Bulgarian forward Aleksandar Tonev, who arrived on a season-long loan from Aston Villa, while Swedish striker John Guidetti, signed on loan from Manchester City, started on the bench.Skipper Scott Brown made his first appearance of the season after recovering from a hamstring injury while defender Virgil van Dijk, left out by Deila for the 1-1 draw at Dundee before the international break after he denied the Dutchman a dream move to England, was reinstated.However, the home side settled down after they took the lead, although the goal enjoyed a touch of fortune.Commons' in-swinging corner from the right ended up with the unmarked Efe Ambrose at the back post and his volley cannoned off Denayer and into the net from a yard or so out with the Dons defence in disarray.Moments later, Commons missed from six yards from a fine cross from left-back Emilio Izaguirre, although the Hoops forward claimed he was pushed by Dons defender Andrew Considine, before Scepovic had the ball in the net clearly after the flag was up for offside.Aberdeen, operating mostly on the back foot, were handed a chance in the 18th minute when Brown's attempted clearance from inside his own box landed at the feet of Goodwillie, but the Dons striker snatched at his shot and the ball flew high over the bar.Pittodrie keeper Jamie Langfield made saves from Commons and Callum McGregor as the champions reasserted themselves and, just before the break, the stretching Commons narrowly failed to get on the end of a McGregor cross where a touch would surely have been a goal.Some fans were still taking their seats as the second half got under way when Commons did get off the mark, although again there was an element of luck about the goal.The former Derby and Nottingham Forest player collected a McGregor pass at the edge of the box and quickly despatched a shot which took a marked deflection off Dons' full-back Shaleum Logan and past the helpless Langfield.With nothing to lose, Aberdeen pushed forward and in the 52nd minute a powerful drive from midfielder Peter Pawlett stung the palms of Celtic skipper Craig Gordon.At the other end Commons skimmed the top of the bar with a vicious drive from 25 yards and it looked like the Parkhead side would punish the Dons further.However, the complexion of the game changed in the 61st minute when a deep cross from Logan was headed back across goal by Considine and Goodwillie was able to head into an empty net.Gordon had to beat away drives by former Celts Niall McGinn and Flood as the Granite City men grew in confidence.The final stages were tense

In the 79th minute McGregor drove just wide from 16 yards after more good work by Commons.Celtic substitute Beram Kayal, on for Brown, appeared to clear a headed knock-down by substitute Adam Rooney, on for Considine, just over his own bar for a corner although referee Bobby Madden gave a goal kick.However, there was no late cavalry charge by the visitors and Celtic midfielder Stefan Johansen might have made it 3-1 in added time with a mazy run through the Dons defence which ended when he was stopped by Langfield