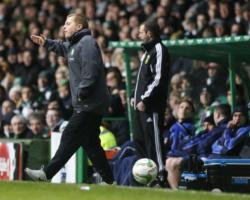 Forster makes history in Hoops winCeltic goalkeeper Fraser Forster has broken the club's 92-year old clean-sheet record with his eleventh shutout in a row.The England international made history as he surpassed the record set by Charlie Shaw in 1913-14 and again in 1921-22 as Celtic recorded a hard-fought 1-0 victory over St Mirren at Celtic Park.Kris Commons set the home side on their way in a match they dominated after just five minutes with a fierce shot from 25 yards that was too hot for Marian Kello to handle as the Hoops frontman netted his 22nd goal of a remarkable season.There were a couple of nervous moments for the home side in the second half, but in truth they should have won the game more comfortably, with James Forrest and Anthony Stokes in particular passing up glorious opportunities.Any fears that Leigh Griffiths may have had over the welcome he would receive from the Celtic fans proved unfounded, as the new signing from Wolves received a rapturous reception from the home support as he was paraded at half-time

With the former Hibs man joining too late to make the Celtic squad, Anthony Stokes was restored to the attack after serving his two-game suspension in place of Teemu Pukki.Joe Ledley's deadline-day move to Crystal Palace allowed recent signing Stefan Johansen to claim his first start since joining the Hoops, and he was perhaps the best player on show on the day.St Mirren had Josh Magennis in attack after he joined on-loan from Aberdeen, and Greg Wylde replaced Adam Newton in the side that was defeated by Hearts in midweek.The visitors started the match brightly enough and John McGinn had a decent chance within 30 seconds, latching on to a long ball but dragging his shot wide from the edge of the area when he had more time on the ball than he perhaps realised.It did not take long for Celtic to assert a measure of control however, and in their first attack of note they opened the scoring.Emilio Izaguirre cut inside from the left and fed the ball into Commons, who turned and directed a shot on target that St Mirren goalkeeper Kello could only help into the net

Celtic then had two chances in quick succession to double their lead.A trademark surging run from the back by Virgil van Dijk allowed the big defender to slip the ball into Stokes inside the area, but the Irishman could only clip a right-foot effort past the post.Then Darnell Fisher, who was full of early running from right-back, was fed the ball by James Forrest and advanced upon Kello's goal

In taking the ball around the goalkeeper however he was forced wide and his clipped cross was scrambled clear by Marc McAusland.The Celtic supporters showed their solidarity with manager Neil Lennon following the abuse his agent Martin Reilly alleged he received at Tynecastle during the League Cup semi-final between Aberdeen and St Johnstone by giving him a standing ovation in the 18th minute.Scott Brown then had a golden opportunity to score when Charlie Mulgrew turned Jason Naismith on the left and pulled the ball back to the penalty spot

Commons stepped over the ball to leave Brown with a clear sight of goal, but the Celtic captain could only side-foot well over the crossbar.St Mirren drew their first save from Forster after half an hour, with McGinn's long pass finding Greg Wylde scampering down the left flank

With just Fisher in his way, Wylde opted to shoot early and his tame effort was comfortably held by history man Forster.Celtic new boy Stefan Johansen was looking tidy in possession, and he showed good feet to side-step Jim Goodwin in midfield before poking just wide from the edge of the box.Stokes then fed James Forrest who cut inside on to his left-foot and unleashed a shot that Kello did well to save low to his left, before the home side went even closer to getting their second goal just before half-time.A nice exchange between Stokes and Mulgrew allowed the former a chance to open his body up on the edge of the area and curl the ball inches past the post.There were nerves around Celtic Park in the 57th minute as Steven Thompson nudged the ball around Forster after latching on to a long pass, however with Efe Ambrose in close attendance and a narrowing angle, the St Mirren frontman could not get a meaningful shot away.St Mirren went even closer to an equaliser soon after

Darren McGregor dispossessed Izaguirre deep inside the visitors' half and fed Conor Newton, whose early ball up the flank caught the Celtic rear-guard napping

Magennis poked the ball around Ambrose and had a clear sight of Forster's goal, the England international doing well to parry away his effort.Forrest then passed up a great opportunity at the other end to ease any home nerves, firing wide from six yards after great set-up play by Mulgrew and Stokes.Balde next come close to adding to the score within the final 10 minutes, running at the heart of the visitors' defence before firing just wide.Ambrose gave the ball away carelessly in the final minute to allow Campbell a chance to run into the Celtic area, but the Nigerian got back to clear for a corner

The delivery was cleared to Sean Kelly on the half-way line, and Stokes did well to dispossess the young defender to give himself a clear run on goal.Incredibly though the striker elected to try to round Kello instead of square the ball to Mulgrew, who would have had an open goal, and he was forced wide.Celtic survived a nervous last few moments for Forster to take his place in the club's history books