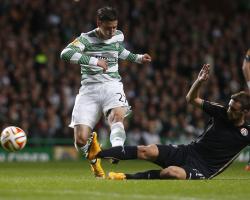 Celtic 1-0 Inverness CT: Match Report - view commentary, squad, and statistics of the game as it happened.Guidetti the difference againJohn Guidetti's ninth goal in seven games proved enough to seal Celtic's fifth consecutive win - but Inverness were left raging that the strike stood.The Swede scored on a 49th-minute counter-attack but Caley Thistle claimed Scott Brown had unfairly won the ball to spark the move.Guidetti soon had a penalty claim rejected before Celtic survived a late onslaught to hang on for a 1-0 win.Caley Thistle created four clear chances in the final eight minutes but some poor finishing cost them and allowed Ronny Deila's men to move up to second spot in the Scottish Premiership.With Craig Gordon rested, Lukasz Zaluska came into the Celtic team for the first time since being injured in an alleged assault in Glasgow last month.The Pole was tested within 90 seconds when midfielder Graeme Shinnie made space to shoot from 25 yards and the goalkeeper held at the second attempt.Inverness manager John Hughes dropped striker Billy McKay to the bench and brought in defender Carl Tremarco, who took Shinnie's normal role at left-back.Marley Watkins played up front for Caley Thistle but he was largely isolated in the opening half as a five-man midfield played close to a back four.Celtic got behind the mass of blue shirts early on when Stefan Johansen cut the ball back for Guidetti but the Swede sent a first-time effort over the bar.Mubarak Wakaso had a shot deflected wide after Shinnie had given the ball away in a dangerous area but Inverness were looking comfortable.Anthony Stokes failed to make the most of two half chances from crosses and Celtic were restricted to long-range efforts in the latter stages of the half

Dean Brill beat away Virgil van Dijk's powerful effort before Stokes and Brown drove not far wide.Shinnie fired over from 22 yards after good play from Danny Wiliams just before the break.The game exploded into life when Brown won the ball midway inside the Inverness half before giving the ball to send Stokes on the charge.Caley Thistle were suddenly exposed and, although Stokes under-hit his pass to Guidetti, the Swede managed to work enough space to fire past two defenders and beat Brill with the power of his strike.However, the visitors were furious with referee Craig Thomson for missing what they claimed was a pull on the shirt of Danny Williams by Brown when he won possession.Watkins was booked for protesting and the controversy continued moments later when Guidetti had two penalty appeals rejected in quick succession.The on-loan Manchester City forward claimed handball when his shot was blocked as several visiting players dived at his feet and then appeared to be bundled over by Tremarco, but a free-kick was given against him after he fell on the ball.Ross Draper was booked for confronting Guidetti after a number of players got involved in the recriminations.The visitors had a good chance to level when Shinnie fed Williams but the left-winger fired over from 15 yards.Wakaso and Tremarco received yellow cards for late tackles as the game remained tetchy.It was also far more open with Inverness bringing on Ryan Christie, Aaron Doran and McKay in the hunt for an equaliser and consequently leaving more gaps at the back.Shinnie shot wide with the aid of a deflection from a decent position before van Dijk missed a good chance at the other end.And Inverness put Celtic under intense late pressure

Greg Tansey blazed over from 16 yards after Doran's shot was blocked and Tremarco nodded over after Gary Warren had headed a corner into the six-yard box.Warren set up another opportunity in injury-time but McKay could not get enough on the ball from six yards and Zaluska pounced to smother, before the Pole saved Tremarco's downward header and scrambled the bouncing ball over the bar