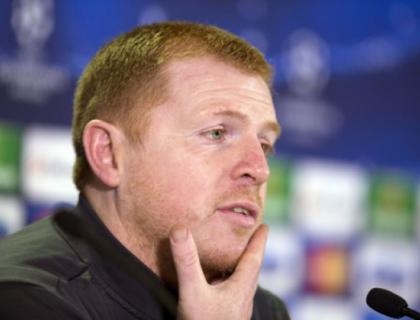 Celtic brushed away the Barcelona blues but only just with a 1-0 win over Hibernian in their Scottish Premiership clash at blustery Parkhead.


Neil Lennon's men had been thrashed 6-1 in their final Champions League Group H game in the Nou Camp on Wednesday night.


Teemu Pukki had borne a lot of the brunt for that defeat but the Finnish striker made amends by scoring the winner in the 28th minute from close range to extend Celtic's unbeaten run in the league to 15 games and keep them on course to retain their title.


It was not the greatest of games, not helped by terrible conditions, but if the Hoops' European aspirations had been doused in Catalonia, then they showed they still have enough when it comes to domestic duties.


Lennon made three changes to his Celtic side. In came left-back Emilio Izaguirre from suspension, midfielder Kris Commons and striker Anthony Stokes, while Adam Matthews and Georgios Samaras dropped to the bench with Derk Boerrigter out altogether.


Stopper Michael Nelson and midfielder Scott Robertson were back in the Hibs side at the expense of Alan Maybury and Owain Tudur Jones, both of whom started as substitutes.


The atmosphere inside Celtic Park at kick-off was not only dampened down by the wet and wild weather.


Following damage done to seats at Fir Park in the Hoops' last league game, the Parkhead club handed "precautionary suspensions" to 128 supporters preventing them from attending home and away matches.


Another 250 season ticket-holders housed in section 111, the home of controversial fans' group the Green Brigade, were moved to other parts of the ground.


Thus the game begin in relative silence, with the home side adapting better to the conditions.


The visitors, though, retained their shape in the face of steady pressure, coping easily enough with some decent crosses into the box which the Hoops players seemed reluctant to attack.


In the 28th minute Celtic skipper Scott Brown found Joe Ledley in the box with a fine pass and his quick cut-back found Pukki racing to the near post to flick past Hibs keeper Ben Williams.


Just after the half-hour mark Williams did well to tip a powerful 25-yard drive from Stokes over the bar with the home side surviving another brief and concerted spell of pressure.


In the 37th minute Hibs defender Jordan Forster headed a Robertson cross over the bar from six yards out and three minutes from the break Robertson's low drive from the edge of the box was heading for the corner until Forster palmed the ball away, the Easter Road men coming alive at last.


Hibs striker Danny Handling was presented with an opportunity at the start of the second half but fired over the bar before Williams made a save from Brown's angled-drive moments later.


The game opened up further. Robertson had another long-distance drive skip past Forster's right-hand post after Williams had made a comfortable save from a Commons free-kick.


In the 56th minute, and with the champions still in control, Williams did well to block a deflected Stokes shot which looked to have fooled him.


Samaras then took over from Pukki before Williams made another save, this time from Commons' shot.


Celtic were on top but as the second half unfolded their lead grew increasingly precarious.


In the 61st minute a moment of slackness inside the Celtic box allowed Hibs skipper Liam Craig a chance but he drove his shot against the post, with midfielder Paul Cairney prevented from capitalising on the rebound by Izaguirre.


Instead of that close call ramping up the excitement, the game became in danger of petering out.


Izaguirre was booked for diving in the Hibs box in the 76th minute with referee Bobby Madden having a word with Lennon, who was enraged by the decision.


Hibs substitute Abdellah Zoubir, on for Cairney, drew a save from Forster with a decent effort after more casual play by the Hoops defence and then fired wide with an angled-drive but the points remained in Glasgow.