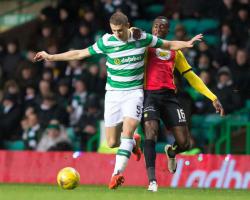 A potential loan or permanent move to the Serie A club in August fell through but the Turin outfit are reportedly set to come back for the Croatian when the transfer window opens in January.

After the 1-0 win over bottom side Partick Thistle at Celtic Park on Tuesday night, where Scott Sinclair's first-half strike took the Hoops 14 points clear of Rangers at the top of the table, the ex-Liverpool manager was asked about his attitude to Simunovic and Torino's interest

He said: "I think they have probably seen how well he's been doing.

"He's only a boy really at 22 years of age and developing very, very well.

"He's got all the attributes and still has improvements to make of course, but if you're a top club you would want someone like him.

"But he's very much a part of what we're building here."

Celtic extended their unbeaten domestic run to 21 games but were far from their best against a side they had beaten 4-1 at Firhill over a week ago, albeit with Rodgers making eight changes from the side that started the 2-1 win over Dundee at the weekend and giving 18-year-old Calvin Miller his debut at left-back.

Jags assistant manager Scott Paterson was frustrated by the chances the visitors missed but insists all is not lost.

He said: "The belief is still there for the players

I know you look at the table and we sit bottom of the league.

"There are games where we can go and get something