Leigh Griffiths happy to issue a reminder of his abilities 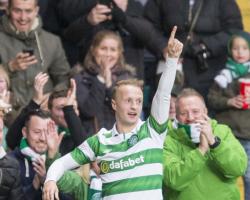 The Hoops striker notched 40 goals last season but has played second-fiddle to in-form Moussa Dembele in recent months with most of his game-time coming from off the bench.

Boss Brendan Rodgers started them both against the Highlanders and the Scotland international scored his first goal in nine appearances for club and country in a comfortable home 3-0 Ladbrokes Premiership win.

Griffiths acknowledged Dembele's form - the 20-year-old French striker has scored 16 goals in 24 appearances - but will be ready to be called upon again when he comes back from the international break.

"It's a team game and I couldn't complain when I wasn't playing because Moussa has been on fire," said the former Hibernian striker, who moved on to nine goals for the season.

"If the shoe was on the other foot - and I was scoring goals like I did last season and got dropped - then I'd be asking questions.

"So I have no qualms about not playing

It's been frustrating but it's a team game and I need to wait my turn.

"I've come in for this game and scored a goal without being at my best.

"My last goal at home was against Kilmarnock (on September 24) so I'll take those goals all day long.

"That's given me good confidence so we'll see what happens when we come back."

Griffiths has also been mostly a bench player for Scotland and can only hope his goal, a close-range drive in 64 minutes after Inverness keeper Owain Fon Williams had parried a drive from Dembele, caught the eye of Scotland boss Gordon Strachan ahead of the 2018 World Cup qualifier against England at Wembley on Friday night

The 26-year-old said: "It's always nice to score before an international game but if you're asking me if it's enough to get me into the starting 11 then I'd say probably not

"That's not my decision to make, that's down to Mr Strachan and what system he prefers to go with.

"I'll be chomping at the bit to start the game but if not I'll sit on the bench and wait my turn."

Inverness held out until just after the break when Scott Sinclair opened the scoring and Griffiths made it 2-0 from close range before substitute Tom Rogic added a third, by which time visiting midfielder Greg Tansey had been dismissed for picking up two yellow cards.

Boss Richie Foran was unhappy with this side's performance but is hoping they can put it behind them and regroup after the international break.

He said: "The boys know themselves that we've been on a fantastic run.

Celtic will dominate games there.