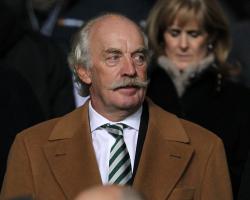 Talk of Celtic and Rangers moving into the English league has long been mooted but has never come close to happening, but Desmond claims top clubs south of the border will eventually engineer change.

The Barclays Premier League has a ÃÂ£5.1billion television deal in place for the next three seasons while the Scottish league's current deal is worth around ÃÂ£15million a year.

The Irishman told STV: "Our concentration is to win the Scottish Premier League

As far as developing other leagues, I think technology is going to change and evolve how football is sold in the future

"Before it was a monopoly with either terrestrial TV or satellite TV, now everybody has the ability to broadcast their results and performances.

"In the future I think there will be different types of negotiations between teams and leagues that will evolve into more competitive leagues in the British Isles.

"I'm taking a 10-year view, what we see in the English Premiership today I don't think will be around in 10 years' time, I think there will be a British Premiership.

"In Italy and in Spain you have the bigger clubs like Barcelona and Real Madrid who negotiate their own football contracts, because they are more advantageous to them.

"I think that will happen in the UK with Manchester United, Liverpool and Arsenal and then I think they will institute a change in the structure of the league."