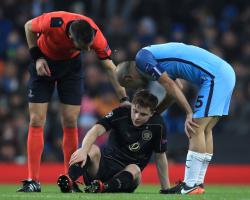 Forrest left the pitch early in the second half of Celtic's 1-1 Champions League draw on Tuesday night after feeling tightness in his leg and manager Brendan Rodgers hopes the Scotland winger caught the problem in time.

Fellow winger Scott Sinclair is still missing for Friday night's Ladbrokes Premiership contest with Partick Thistle and Forrest's absence could give Gary Mackay-Steven his first start of the season.

"James Forrest came off injured so he is probably the only doubt," Rodgers said

"We will get the scan results for that later

"He has been brilliant all season, scoring goals, creating goals and, very importantly, working hard tactically for the team right the way through the season.

"Of course, if he's unavailable for us for a little period of time it will be a miss

But just like Scotty being out, it offers an opportunity for someone else.

Sinclair has missed several games with a hamstring injury and Rodgers has pinpointed the visit of Dundee on December 17 as his likely comeback date.

"He is coming along very well," the Celtic manager said

"It obviously won't be this weekend but we are very hopeful that, probably for the Dundee game, he might not be too far away."