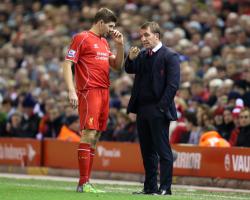 Rodgers remained unwilling to discuss future transfer activity but it is believed there is no substance behind Celtic being installed as favourites with bookmakers for Gerrard's next club after his departure from Los Angeles Galaxy was confirmed on Tuesday.

Gerrard is still considering his next career move and the 36-year-old's previous working relationship with Rodgers, and his apparent desire not to play against former club Liverpool, has led to speculation he could end up in Glasgow

Former Anfield boss Rodgers said: "I never speculate or speak about players coming into the club

I never have done and don't intend to start now - that will always remain private.

"The only thing I would say with regards to Steven, he has been an incredible player

I had him for a number of years at Liverpool and he was absolutely brilliant with me.

"As a young manager going into such a great club, having the captain and real senior player there, to be able to work closely together with him and learn about the club and work together on the field was fantastic.

"In terms of the speculation, I'm not sure where it's come from

But players coming into the club will always remain private."