5 things we learned from the Ladbrokes Premiership this weekend 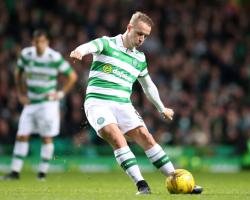 Here are five other things we learned from the weekend's action.

He needs time to stamp his authority on his side but he will know now that fans are not always minded to be patient.

Griffiths has scored in three consecutive starts for the champions to take his tally for the season to 12 and has laid down the gauntlet to Moussa Dembele, whose form has dipped in recent weeks.

Martyn Waghorn is back on form

Waghorn had struggled to recapture his form following hamstring problems and saw Joe Garner preferred up front but he delivered a reminder of his ability to earn Rangers a 2-1 win at Hamilton.

Motherwell can take points off the top five teams

They were given a helping hand by Zander Clark's own goal and failed to register a shot on target, but Saints also had some fortune with their equaliser when the ball rebounded in off Chris Kane.

Rangers have a strong grip on second place

The Dons have only taken four points from their last four matches.